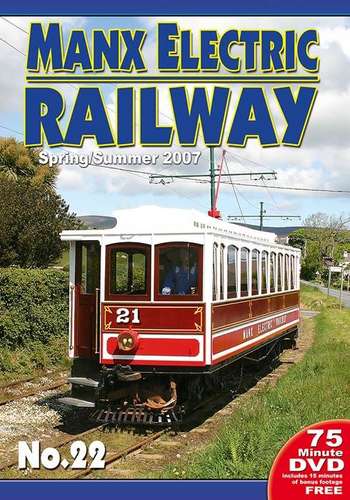 Winter 2007:
After having no winter service for a few years, a limited weekend-only service operated on the Manx Electric during winter 2006/2007. We take a look at the operations over the weekend of 3rd/4th February.

Car 22 started on the Saturday but had to come out of service, leaving car 19 to work on the Saturday afternoon and all day Sunday. See both trams on various single line working and performing unusual crossover moves.

In what was superb sunny but bitterly cold winter weather, see both trams at various lineside locations as they pass the camera on their way to/from Ramsey plus various track renewal jobs in progress and car 6 in action as a Permanent Way car.

Spring 2007:
Brief footage from a short visit in spring. With the summer timetable getting underway on 2nd April it was back to normal business with cars 19, 20 and 22 and the 40-series trailers on the Ramsey service.

Various combinations are seen including car 21, freshly painted on its first day in service on a test run to Laxey.

TT Specials:
With the TT motorbike races celebrating their centenary and thousands of extra visitors on the island, Isle of Man Transport provided many extra trams including a 'commuter tram' - 07.10 from Ramsey!

Turning the clock back 30+ years, this special morning tram is featured along with the 17.40 return from Douglas, plus all the sights and sounds from Ramsey Sprint Day, easily the busiest and best day of the year for extra trams running to Ramsey.