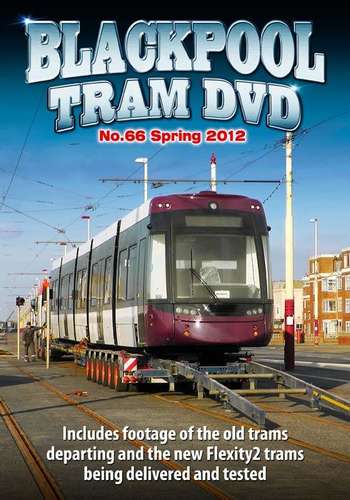 November 2011 to February 2012 turned out to be one of the most fascinating periods in tramway history. The departure of an incredible 22 trams from the old fleet and arrivals of the brand new Flexity2 trams all mixed together to create a feast of trams!

Some of these trams had not seen daylight for many years and as well as the loading and departure process, footage of the trams in service in their final days is included.

Trams arriving in Blackpool: With the old trams on their way out, six of the Flexity2 trams were delivered to their new depot at Starr Gate. The arrival and offloading of 006 on 2nd February in fine sunny weather is featured.

New Trams on Test: Test runs and then driver training also took place in the winter. See various Flexity2 trams at Bispham and then at Thornton Gate. Cardiff water-car 131 is used for track grinding on New South Prom and Boat 600 tests out the new overhead wires, running to Thornton Gate on 29th February.