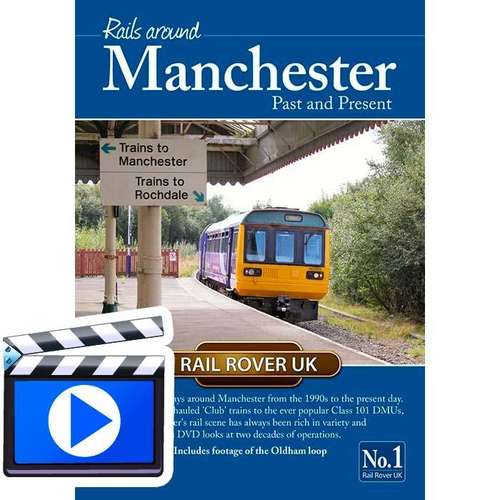 A look at the railways around Manchester from the 1990s to the present day.

From the Class 37 hauled 'Club' trains to the ever popular Class 101 DMUs, Manchester's rail scene has always been rich in variety and this DVD looks at two decades of operations.

With the 'electric' station of Piccadilly and the 'diesel' station of Victoria, Manchester has always been a great city for railways.

As well as Victoria and Piccadilly various other stations and locations are included such as Heaton Chapel, Stockport, numerous stations on the Marple and Rose Hill lines, Hadfield, Glossop, Denton, Salford, Kearsley, Bolton, Horwich, Blackrod and the East Lancs Railway.

Many of Manchester's well known trains of the past 20 years are also included such as the class 37 hauled 'Club' trains to Blackpool, the elusive ex-Clacton class 309 EMUs running to Birmingham and celebrities such as green class 101, 'Daisy', 101 685 on local services.

Includes footage of the recently closed Oldham loop during its final weeks of operation.

This is the first in a new series of DVDs produced by Rail Rover UK.