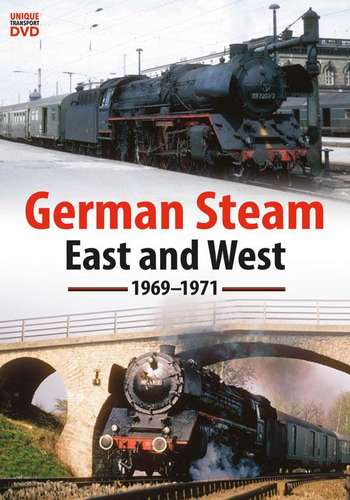 In 1970, 25 years after the end of World War 2, Germany remained a divided country. Not only was it spilt politically between the capitalist West and communist East, but the railways of each country were both following differing policies. Although steam was still to be found in both East and West Germany, in the latter it was gradually being replaced by diesel and electric but in the former it remained still the dominant form of motive power.

In the DDR Saalfeld, Gera, Neustadt (Orla), Aue, and Bärenstein are visited, featuring lineside sequences on the Gera and Leipzig lines from Saalfeld and elsewhere.

The narrow-gauge Cranzahl-Kurort Oberwiesenthal and Wolkenstein-Jöhstadt lines are also visited where trains are followed by car. The former features the Neubau 2-10-2s and the latter the famous IVK Meyer compounds.

Filmed by Wilf Watters with commentary by Peter Millest and with thanks to John H Atkinson.