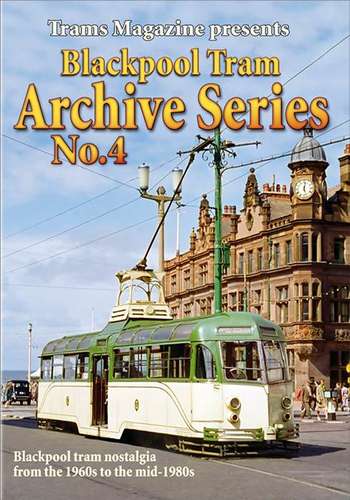 With footage from the 1960s to the mid-1980s, this nostalgia-packed programme takes the viewer on a journey into the golden years of the Blackpool tramway.

With footage from the long closed routes around Marton, Lytham Road and Dickson Road, see the likes of Railcoaches, Brush cars and Balloons from a long gone era.

There's footage of a number of enthusiast tours from the 1960s with Conduit car 1, Dreadnought 59, Crossbench 2, VAMBAC 11, Fleetwood 40, all cream Towing car 275 and numerous Standards.

Travel over the long forgotten line from Starr Gate, along Squires Gate Lane and onto Lytham Road.

See rare footage of Coronation 304 pushing a failed Balloon car, a Boat car with a bizarre wooden framework for advertising purposes, amazing film shot from a car chasing trams along Dickson Road and Coronation cars on Fleetwood winter service in the snow!

Using 100% archive film (colour and black and white) - most of which has never been seen before - this fourth title in the Blackpool Tram Archive Series takes the viewer on a fantastic journey into the past.

Produced by - Train Crazy
Running time - 70 Minutes
DVD only
Quality guarantee: The programme is professionally produced with a stereo soundtrack, informative commentary and digital editing. The DVD has chapters and menus.