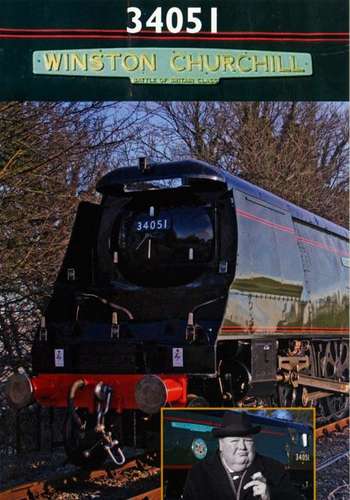 A special edition Locomotive Profile to commemorate the 50th anniversary of the death and funeral of Sir Winston Churchill. The Bulleid light Pacific No. 34051 named Winston Churchill was central to the final arrangements for the funeral. Especially prepared ready for the day in January 1965, the locomotive was eventually saved as part of the National Collection and has been cosmetically restored by a team at the Mid-Hants Railway for display at York.

This DVD tells the story of the locomotive and includes an interview with the remaining crew member on the day, fireman Jim Lester, who recalls the speedy preparations put into place following Sir Winston’s death and how he was chosen to be on the footplate on that momentous day. Jim recalls the actual journey to Hanborough, Oxfordshire (closest station to Bladon, the Spencer-Churchill family church) from Waterloo and details after arrival. Original film of 34051 on the funeral train plus its wanderings during preservation following withdrawal from Salisbury shed in 1965. An extensive interview with Jim Lester explaining the start of his career on the footplate is included as an additional section.

We delve into the restoration of the locomotive at Ropley and view all its stages of painting and replacement of parts. Transport to York and unveiling on 25th January 2015 is the culmination of the project. Ian Harrison, chairman of the Southern Branch of the Friends of the National Railway Museum, explains how the restoration and fund-raising was accomplished.