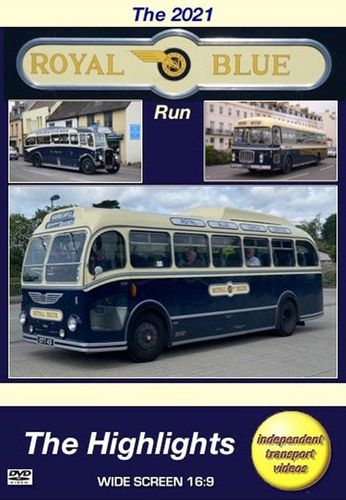 The 2021 Royal Blue Run was organised by the Thames Valley & Great Western Omnibus Trust as it has been for the past twenty years. The event was postponed from 2020 due to the ongoing coronavirus pandemic, as it was intended to celebrate 140 years since the formation of Royal Blue in 1880 and the centenary of the National Omnibus & Transport Company, formed in 1920. The route of the run connected the territories of the successors of National, which were Eastern, Southern, and Western National.  Coaches on the 2021 Run began their journey from various locations in Essex including North Weald, Chelmsford and Southend. They continued their journey through Reigate, Guildford, Basingstoke, Southampton, Bournemouth, Weymouth, Dorchester, Bridport and Exeter to Plymouth. They carried on into Cornwall through St Austell, Truro and Newquay. Returning via Barnstaple and Taunton. Completing the Run at Stroud after travelling via Glastonbury, Frome, Trowbridge and Chippenham a total of some 750 miles were covered over four days from the 18th to the 21st of June.

This DVD programme brings you the highlights of this epic journey. We begin our journey with some still shots of the coaches preparing to leave on the Friday morning in heavy rain at North Weald in Essex and passing through Chelmsford. Towards the end of the first day we film the coaches arriving for their first overnight stop at the ‘Bursledon Brick Works Museum’ on the outskirts of Southampton. The Saturday morning departure from Bursledon is on board former Western National Bristol RELH6G/ECW C45F coach 1482 (RDV 433H) where you get the driver’s eye view of the journey. Bournemouth is our next location as we film the coaches driving along the seafront and parking up at Westbourne Coach Park for a well-earned coffee break! The mass-departure is filmed as the coaches leave for Weymouth. Again we are in the driver’s seat of 1482 for the journey to Weymouth. Our cameras film the coaches in Weymouth as they pass by the famous clock tower situated on the promenade. Back on the RELH we travel through Dorchester and head west. Our cameras are in Bridport ready for the arrival of the coaches as they call in and pass through this pretty Dorset town making their way onto Plymouth for the overnight stop. Sunday morning departure from Plymouth is onboard 1482. With the driver’s eye view we travel into Cornwall over the Tamar road bridge through Saltash, Liskeard, St Austell to Truro. On Monday morning our cameras are in Taunton to film the coaches as they travel through the town for a break at Taunton’s now closed down bus station. Special permission had been granted for the coaches to park for a rest as it is currently used by First South West to park buses in-between duties. Again we witness a superb mass-departure as the coaches leave for their final leg of the journey to Stroud in Gloucestershire. We hope that you enjoy the ‘Highlights’ of this epic journey, so settle into your favourite armchair and be transported back in time as the past is recreated on The 2021 Royal Blue Run.