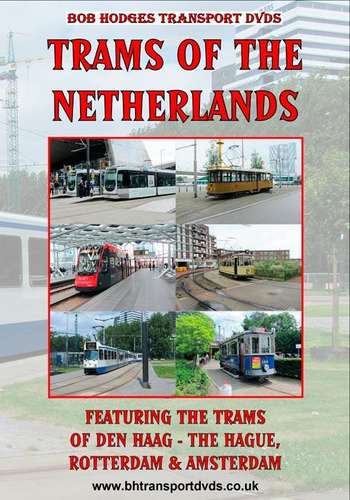 Part 1: Den Haag - The Hague
The tramway system in The Hague is operated by HTM Personenvervoer, the successor in 2002 to Haagsche Tramweg-Maatschappij which can trace its origin back to horse and steam tram lines in 1887. Today there are twelve electric tram routes in The Hague which is the seat of the Dutch Government. Routes 1, 6, 9, 12, 15, 16 are operated by La Brugeoise GTL8 trams delivered in the 1980's and 1990's, these are high floor 8 axle trams in HTM red and cream livery, although many carry all over advertising. Routes 2, 11 and 17 are operated by Alstom Regio Citadis light rail vehicles in blue and white Randstadrail livery, Randstadrail also operates Metro line E which shares track with routes 3 & 4 on their route to Zoetermeer as far as Leidschenveen. There are 2 main line stations in The Hague, Centraal, which has 6 routes running through it on 2 levels and Hollands Spoor which also has 6 routes including route 11 to Scheveningen which terminates at the station, vintage tram operation on this route can be seen in this chapter as well as regular service trams in various locations in the city.

Part 2: Rotterdam
The tramway system is operated by Rotterdamse Elektrische Tram, the RET, nine routes are in operation in 2016. The hub of the system is the Centraal Station, which almost all the tram routes pass by. The tram fleet consists entirely of Alstom Citadis 1 and 2 vehicles delivered between 2003 and 2013, Rotterdam is the only Dutch city to have an entirely low floor fleet. This chapter shows trams in service at various locations in the city including the Erasmusbrug, the bridge over the Nieuw Maas river that links the city with the suburbs in the south, this bridge has a huge lifting section that includes the tram tracks. Also in this chapter is vintage tram operation on route 10 which is a circular tour that operates in the summer months.

Part 3: Amsterdam
The tramway system in Amsterdam is operated by the GVB, Gemeentelijk Vervoerbedrijf which was formed in 1943. Today there are fourteen tram routes in operation, many of which connect new suburbs with the city centre. The hub of the system is the magnificent Centraal Station where 9 routes terminate on 2 large loops, these routes include no. 5 which shares track with Metro route 51 from Station Zuid to Amstelveen, this is the only route that needs double ended trams, this is because of the stub end terminus at Amstelveen Binnenhof and island platforms on the section shared with the Metro. All the other tram routes have loops at their termini and can use single ended trams. The tram fleet consists of 45 8 axle articulated trams with low floor centre sections built by La Brugeoise et Nivelles (BN) in the 1990's, 20 of these are double ended for route 5, and 155 Siemens Combino low floor trams, four of which are double ended. This chapter also includes a visit to the Amsterdam Tramway Museum line which runs from Haarlemmermeerstation to Bovenkerk/Amstelveen a distance of 7.2km, vintage trams from Amsterdam can be seen in service.

Subtitles, no commentary, enjoy the sights and sounds of trams in the Netherlands.