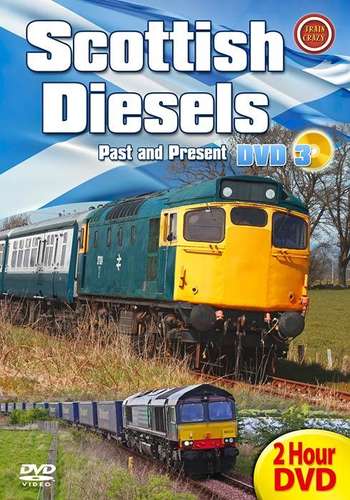 Just like most of the country, the diesel scene in Scotland has changed dramatically over the last few decades.

From the humble class 26s and 27s, to the mighty 47/7s and the ever popular large logo class 37/4s, class 66s now dominate the freight scene and class 67s haul the sleepers.

Numerous railtours and specials see class 37s and 47s return to their old haunts every year and if you remember the 'old school' and the era of blue, or perhaps you follow the modern scene, or maybe you just like Scottish diesels, this DVD is for you.

The third title in the Scottish Diesels Past and Present series takes the viewer on a journey through the decades.

Glasgow Central, Queen Street and the suburbs, in the mid 1970s with class 37s top and tail on Edinburgh services, class 101 DMUs in blue/white and blue, class 303s in BR blue, brand new class 314s, a pair of class 20s on a railtour.

Highlights from the Scottish traction scene in 2008/2009 including DBS liveried 37670 running to Oban, a 37/47 combination on the Royal Scotsman and numerous class 66 hauled freight flows.

A cab ride from Grangemouth Junction to Coatbridge Central filmed in 2009 from 66414 on the southbound 'Tesco' train.