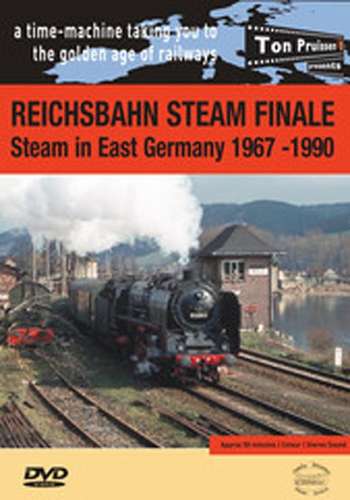 Ton Pruissen was a frequent visitor to East Germany during the communist era, and filmed considerable footage of the standard and narrow gauge lines of the Deutsche Reichsbahn, despite the ever attentive Stasi, or secret police; this film covers the years 1967 to 1990 and largely cover the standard gauge, but narrow gauge is also seen.

The Reichsbahn was arguably the ‘Last Great Steam Show’ in Europe, and it continued to modernise and develop its steam locomotive fleet into the 1960s. Shot at a variety of locations, including Wittenberge, Halberstadt, Görlitz, Leipzig and Saalfeld, locomotives seen include the Class 44, 50 and 58 2-10-0s (the latter 3-cylindered), the Class 41 Mikados, the huge Class 95 2-10-2 tank locomotives, seen mainly in passenger service, Class 01 Pacifics and the majestic Class 01-5 rebuilt Pacifics. Also seen are the Görlitz Narrow Gauge Locomotive Works and a selection of largely Saxon NG locomotives at work.

Extras: Viewable photographs, maps and background notes, these in PDF format. The film may be viewed with or without the commentary.Notwithstanding its technical development, I have to admit I have never been a huge fan of German steam which, especially in its later years, had a certain uniformity, whether in West or East Germany. So I was pleasantly surprised to find myself really enjoying this film; as always with Ton it is very well shot and dubbed, and there are more than a few dramatic snow scenes - plus, of course, the Class 01-5 Pacifics rather broke the 'uniformity'!