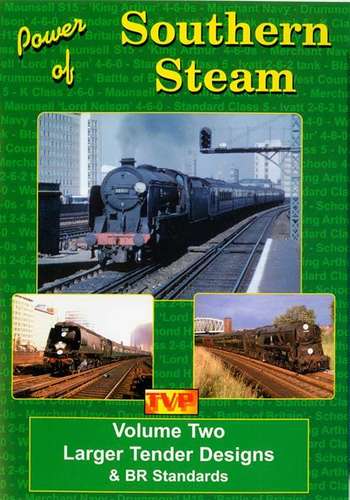 An exploration of Southern Steam including the larger tender engines and the BR Standards of later years.

Archive film from the 1950s and 1960s is used to show each class on a variety of traffic.

In addition, some of the survivors in preservation are included to bring the story up to date.

The 'S15's including scenes from Southern days
The 'H15's
'Remembrance' Class 4-6-0s
Billinton's 'K' Class 2-6-0s
Maunsell's 2-6-0 'N' Class plus the N1s on freight and passenger
The 'King Arthurs' in the days of working steam
Maunsell's 'U' Class and U1 Class on cross country traffic
The 'Lord Nelsons' 4-6-0s in the days of working steam
The Schools Class 4-4-0s on express passenger workings
Bulleids Pacifics including 'West Countries', 'Battle of Britain' and 'Merchant Navy' classes on the line from Waterloo to Bournemouth and Weymouth on a variety of traffic including the 'Bournemouth Belle'