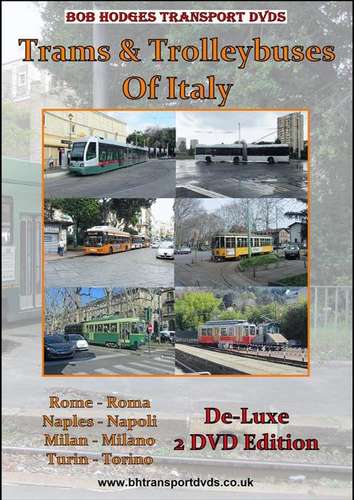 These videos feature the trams and trolleybuses of Rome, the trolleybuses of Naples, the trams and trolleybuses of Milan, and the trams of Turin. Rome has 6 tram routes, at one time Rome was Italy's largest tramway system but in 1930 the trams were removed from the city centre and during the 1930's, many tram routes were replaced by trolleybuses. More routes were abandoned in the 1960/70's until only a few routes were left, new trams entered service from 1990 and there have been new routes and extensions in recent years. Most of the articulated trams delivered in 1948/9 and 1953 are still in service and are being overhauled for further use in 2018/9. There is one modern express trolleybus route in Rome which was opened in 2005. In 2018 Naples has only 3 trolleybus routes in operation, the 3 route tram network has been suspended since 2016 with no date for its' re-opening. Milan still has one of the largest tram networks in Europe despite closures after Metro construction, particularly in the city centre. About 150 of the iconic 'Peter Witt' trams of 1929/30 are still in service aswell as articulated trams from 1955-60 and 1976/7, newer trams from Adtranz and AnsaldoBreda have been delivered since 1999. There are also 4 trolleybus routes, which provide an intensive service on the outer ring road with a couple of branches. Turin has a modern tram network with many low floor articulated trams, plus a number of articulated trams rebuilt or rebodied from older trams, the Turin undertaking also operates the Sassi - Superga rack tramway.