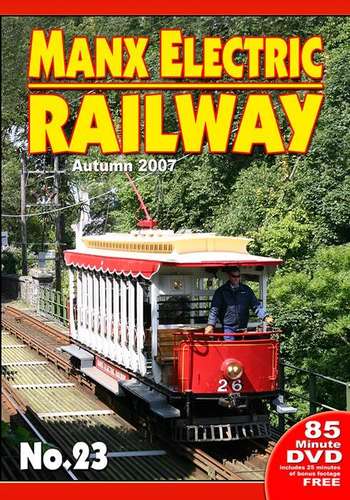 This programme looks at an interesting week for the MER from July 2007, including the enthusiasts events and other special trams run by the IOM 30 Group and TLP Tours.

The programme begins on the 21st July with winter trailer 57 on the Ramsey service behind car 9. This unusual pair are featured at various locations.

The first of two MER events days was on Monday 23rd July, when a fully decorated car 32 with trailer 57 burst through a banner at Douglas to mark the 50th anniversary of the takeover of the operation of the MER by the Manx Government.

32+57 then ran to Ramsey. Cars 2+49 were also in service. An evening service operated on the MER, with journeys to Laxey and Ramsey.

On 24th July, enclosed trailers were used on the Ramsey service, which saw car 22 couple to 57 and car 33 work with Royal trailer 59. Both sets are featured at numerous locations.

On the Tuesday evening TLP Tours ran a buffet supper tour and used trams 2+42 and 9+49. Both motors were decorated with flags and carried headboards, and to make the occasion even more special they performed a parallel run between Douglas and Groudle.

On Wednesday 25th July, trailer 57 was on service again and started out from Ramsey. The odd pairing of 6+37 was on specials, car 5 worked the evening Groudle shuttle instead of the regular car 9, and cars 1+49 were hired for a special evening journey to Ramsey and back.

On 26th July, car 5 was unusually allocated to the Ramsey service while the IOM 30 Group hired the odd pairing of 22+51 for a photo-stop charter.

On Friday the 27th our cameras spent the entire day on a special a second photo-stop charter with trams 26+42. See various odd moves, shunts and film from the front platform.

The programme finishes on Saturday 28th with 6+37 on the Ramsey service again and 33+61 on specials.

Produced by - Train Crazy
Running time - 85 Minutes
DVD only
Quality guarantee: The programme is professionally produced with a stereo soundtrack, informative commentary and digital editing. The DVD has menus and scene selection.