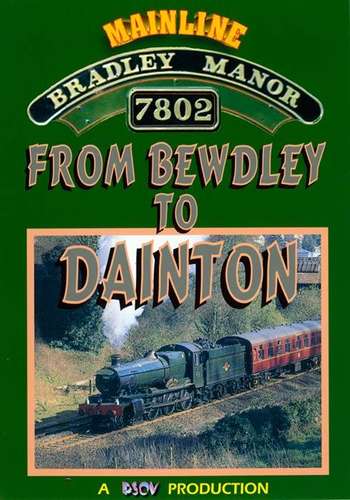 This programme catalogues the progress of ex GW 4-6-0 7802 Bradley Manor from scrapyard condition through its first runs on the SVR and triumphant return to the main line and Devon Banks in 1995-1996.

Shots of the loco in Barry condition and during restoration between 1986 and 1995 plus running-in turns on the Severn Valley Railway early in 1994.

Double heading with 7325 on 19th May 1995, Two shots of the locos at high speed. Following the failure of 7325 at Worcester, 7802 returned the train to Stourbridge alone (2 locations).
Exeter-Plymouth on 14th October 1995, Double heading with 70000 Britannia. We see the climb to Dainton summit at Stoneycombe Quarry (2 angles) followed by an awesome three minute shot of the locos slogging up the last half mile and entering the tunnel.

Worcester-Newton Abbot on 20th January 1996, 9 locations showing the locomotive at speed as well as working hard.

Plymouth-Newton Abbot on 24th February 1996, The dramatic climb of Hemmerdon's 1 in 42 gradient is seen in a long running trackside shot followed by a second camera position at the summit.

Totnes-Worcester on 16th March 1996, 3 shots on the climb of Dainton including slogging up to the tunnel when the speed dropped to 4mph. Other locations include Whiteball Tunnel, Taunton and Horefield Bank.