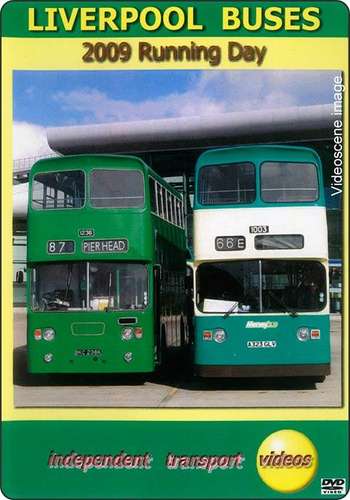 Sunday 20th September 2009 marks our third visit to the Merseyside Transport Trust's annual Running Day. Again we have captured the excitement and atmosphere of the day, taking you back in time with these superbly restored vehicles.

This time our programme starts at the smart new bus and rail transport exchange, Liverpool South Parkway, one of the main termini used for the running day, the others being Liverpool Pier Head and Exchange Street, Woolton and of course Penny Lane.

We see the vehicles arriving and then taking up their duties for the day. Our first ride of the event is on board Leyland Atlantean L835 (FKF 835E) departing Liverpool South Parkway for the city centre, arriving at Exchange Street.

Here we also witness some of the new vehicles in service with Arriva which form an interesting contrast with the buses of yesterday.

From here we travel to Penny Lane on board East Lancs bodied Leyland Atlantean 1836 (TWM 220V) on service 4.

After a short pause at Penny Lane it is time to board verona green and cream liveried Atlantean 1003 (A323 GLV) a 1983 Alexander bodied example on service 35 back to Exchange Street.

Back in the city centre we are joined by both Crosville and Ribble vehicles to set the scene of the 'NBC' years.

Our cameras board Crosville Bristol VRT DVL435 (RMA 435V) for the short run down to the Pier Head.

The new road in front of the Liver Buildings is now open and provides an excellent backdrop for the preserved vehicles, bringing back even more memories from the days when this was the major terminus for the buses and the trams in Liverpool.

From the Pier Head we board Leyland Atlantean 1055 (A135 HLV) on service 35 to Woolton then changing to service 66 to Liverpool South Parkway.