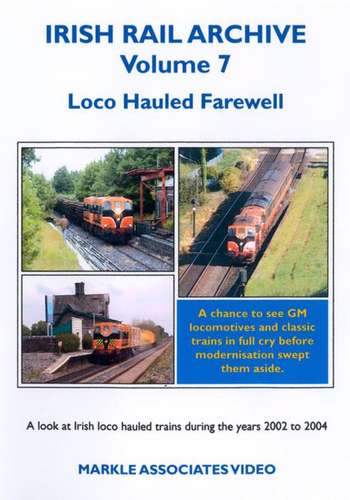 In the years 2002 to 2004 rail enthusiasts thought that the haulage of trains by locomotives in Ireland had already fallen to chronically low levels. Little did we know what was to follow - within a couple more years a combination of freight closures and new rolling stock orders would see most Irish locomotives about to become unemployed.

However, during this period two photographers, Mark Kelly and Paul Davis, made video recordings of locomotives at work. This included searching out liner trains running at night, and braving atrocious weather conditions to film trains on disused lines.

This DVD features the 071, 121, 141, 181, and 201 classes giving of their best before the rot finally set in. The coverage of this video is pretty well the entire Irish Rail system. The trains featured include - passenger workings using Cravens, Mark 2 and Mark 3 coaches, while freight coverage includes the Sligo oil traffic, bagged and bulk cement, timber, sugar beet, container and beer traffic. The annual weedspraying operation is seen on the Kingscourt branch and between Mullingar and Athlone, and a rail train is seen between Ennis and Athenry - places not visited by trains nowadays.

This video also features new locations for Markle, from along the banks of the Royal Canal and Longford yard to Limerick Junction North.