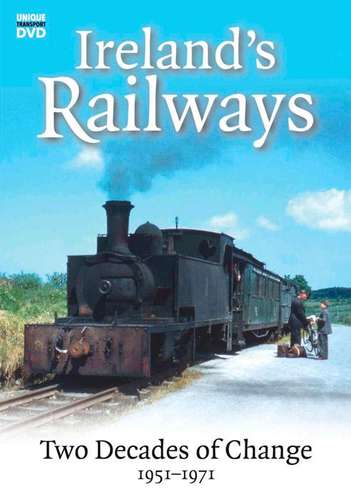 This colour archive programme recalls the railways of Ireland as they were from the early 1950s until the final gasps of steam in 1971 and tells the story of a period which saw vast changes to the system - especially the rise of the diesel at the expense of steam and the elimination of most of Ireland's famous narrow-gauge lines.

Beginning with the latter we visit the Cavan & Leitrim line with its weird and wonderful collection of locomotives and its headquarters at Ballinamore and then on to further narrow-gauge locations, including Strabane, Dromod, Donegal (Town), Lough Eske, Letterkenny and Arigna, witnessing steam in action and also the quaint railbuses of the time and the well-known road-side lines.

We also look at the Southern Irish standard gauge lines with their early diesels and late steam locomotives at places such as the Guinness Brewery in Dublin, Bray, Clonmel, Cork, Albert Quay, Bandon and Timoleague, whilst the famous horse-worked tramway at Fintona is not to be missed!

Moving into Northern Ireland we see trains around Belfast, Larne Harbour, Cavan, Clones, Carrickfergus and Ballyhaise amongst others, with J15s, S class 4-4-0s and many early diesel railcar designs.

The story ends with the final fling of the big LMS 'Geep' 2-6-4 tanks on the Larne to Belfast stone trains, marking the conclusion of two decades that swept away much of what had gone before and changed the face of Ireland's railways forever.