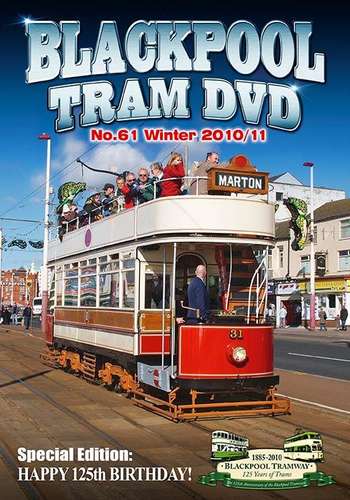 This special edition of the Blackpool Tram DVD covers the autumn months of 2010 and the 125th Anniversary events.

Starting in early September, as the main events week approaches, more Vintage cars arrive including Marton 31 from Beamish and OMO 8 from the LTT collection. Heading into preservation go Balloon car 703 and Brush car 622.

Extended highlights of the main week include visiting Vintage cars 2, 31, 762 and 765 on tours and specials plus Blackpool's own in-house fleet such as Stockport 5 and Sheffield 513. The eight tram parade on the 29th September is featured in full, filmed from the superb vantage point of an open top bus on the promenade!

Into October and the busy half term week saw many extra trams on specials. Balloons 701, 715 and 726 were back in service alongside Twins 671+681 and 673+683. There's a top deck ride on Marton 31 to Bispham and a busy Saturday evening is featured with lots of trams in service.

The final week of the season saw OMO 8 make its debut in preservation in passenger service and duly became the first OMO to run for 17 years. On the last weekend in fine sunny weather, OMO 8 plus 304 worked enthusiasts tours and on specials were 602 and the newly refurbished 600. The final trams on the last evening of operation are included.

The year 2010 also marked the 50th anniversary of the Twin car. A detailed look is taken at the first production set 671+681.

Year End: The entire operational tram fleet as they finished 2010.

Note: The footage used on this DVD is not the same which features on the 125th Anniversary Souvenir DVD. Other than the actual parade on the anniversary day itself, all the footage on this DVD is brand new and has not been used before. You are not buying the same film twice! During the events week we shot in excess of six hours of footage so there is plenty of additional unseen footage.