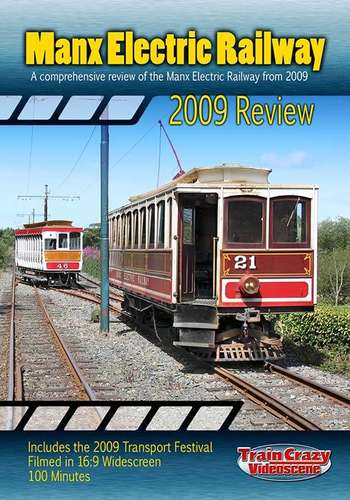 A comprehensive review of the Manx Electric Railway from 2009, filmed in 16:9 widescreen for maximum viewing pleasure!

SPRING:
The first day of operation on the MER in 2009 was Monday 6th April. Matters got off to a bad start as just three weeks previous, the majority of the fleet were taken out of service with cracked axles.

A shortage of trams on this first day forced Saloon Trailer 57 into service and with car 21 towing it, these two worked the 09.40 from Douglas on the first day. The MER was running again!

SUMMER:
Extended highlights of the enthusiast events, plus the IOM 30 group private hires and TLP tours.

AUTUMN:
With just a skeleton service during October and winter closure again, this day in September provides one last look at the MER from 2009. Various trams are featured.

This is No.27 in a series of programmes about the Manx Electric Railway. Originally produced two or three times a year, the decline in the number of trams used, matched with extended periods of closure, no winter service and fewer filming opportunities, has resulted in the change of format to an annual review.

If you were buying the Manx Electric Railway DVD previously, this is simply two programmes in one, covering the entire year in 100 minutes and, for the first time, filmed entirely in widescreen.