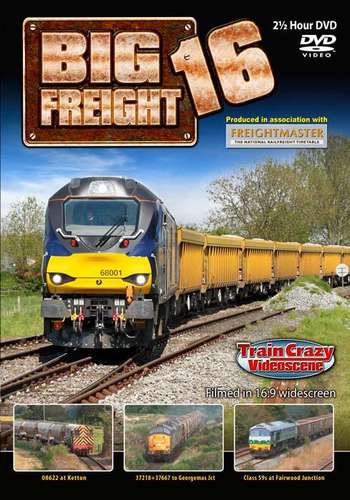 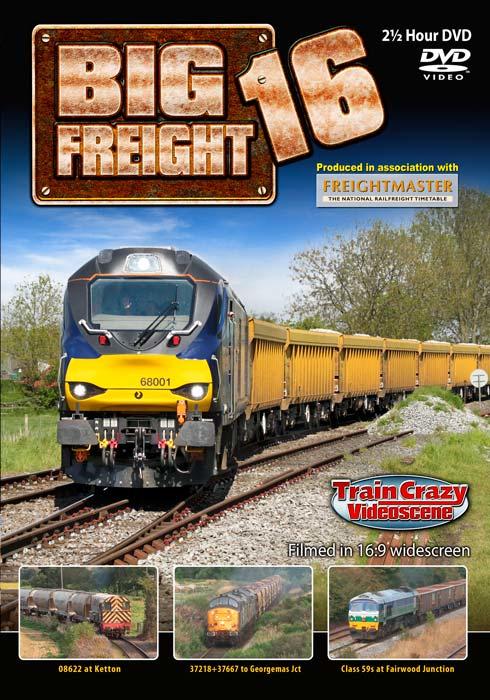 Big Freight 16 features a feast of freight trains, filmed countrywide during 2016. Produced in conjunction with Freightmaster, this brand new programme shows the huge variety of freight trains operating today and the astonishing variety of motive power hauling them! From Class 20s to brand new Class 68s and many more in between!

Peterborough to Leicester Line - Part One: At 53 miles in length, this east-west route links the East Coast and Midland Main Lines. With fine station buildings and traditional signalling, the volume of freight has increased in recent years and part one looks at the section from Peterborough to Oakham. All major locations are featured including Uffingham and its manual level crossing gates, Ketton cement works branch with 08622 and the Midland Railway wooden signal, also at Ketton. Numerous freight flows are featured.

Rails around Derby: In recent years Derby has become THE hotspot on the rail network, in particular the stretch of line from Stenson Junction to Wichnor Junction. As well as the regular flows of Class 56, 60, 66, 68 and 70 hauled freight and engineers trains, the introduction of Colas Class 37s on IM trains, Europhoenix Class 37s on EMU moves plus Class 20 LU stock moves and many other exotic consists, this really is an amazing stretch of railway! Highlights from a number of visits during 2016 are included here.

Class 37 Far North Adventure: Another highlight of 2016 was the use of pairs of DRS Class 37s on ballast trains from Inverness to Georgemas Junction. Starting at Scout Green, our cameras attempt an amazing 48-hour out and back adventure, stopping off at many scenic locations and taking in the likes of 2 x 68s on the Tesco train, Colas 37s at Carlisle, 47812 at Beattock, top and tail 56s at Abington and then the main event, 37218+667 filmed at many locations all the way to Georgemas Junction and back!

Fairwood Junction: 2016 marks the 30th anniversary of the introduction of the Class 59 and there's no better place to see these locos at work than the Freightmaster Hotspot of Fairwood Junction, near Westbury. A superb sunny day is featured with a staggering 18 trains in 12 hours including nearly all of the 59s plus 66s and even a 60!

• All sections are introduced with full commentary and maps.
• Filmed in 16:9 widescreen.
• So much more than just train after train running past the camera!
• This is all brand new footage, filmed 2016. It has never been used before and is not available anywhere else – GUARANTEED.