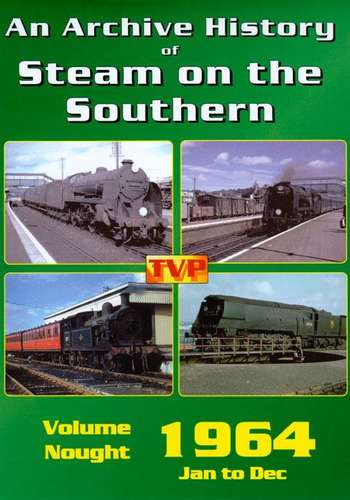 The steam fleet in Jan 1964 with a round up of the classes with everything from Pre-Grouping designs to Southern locomotives through to the Standard designs.

Spring Railtours with the ‘Sussex Downsman’, the ‘Hampshire Venturer’ with ‘Q’ Class 30548.

Steam in the West with Bulleid Pacifics and Standards on the Southern ‘Way to the West’ from Salisbury to Yeovil.

Summer on the Isle of Wight with O2 Tanks on the lines to Ryde and Ventnor.

Summer Memories with a journey from Waterloo to Southampton, Bournemouth and along the branch to Swanage with a variety of motive power including Ivatt Tanks and Standard 4s.

Cross Country Steam on the line from Reading Southern to Guildford and Redhill with Maunsell 2-6-0s and Standard designs.

Steam Fleet in June 1964 with a look at the classes still at work on the main line with scenes at Yeovil, Worting Junction, Seaton junction, Woking, Brockenhurst, Eastleigh, the Lymington Branch, Southampton Docks. A wide range of classes are shown in action on a variety of traffic.

Steam Finale on the Withered Arm with the line from Plymouth to Okehampton, Padstow, Wadebridge and the route to Halwill Junction, Exeter St Davids and the branch to Ilfracombe.

The Autumn of 1964 with steam on the main line and a variety of Bulleid designs.

Steam Finale to Exeter with workings at Yeovil Town and Yeovil Junction.

Farewell to Steam Railtour with 92220 ‘Evening Star’ on the Southern Counties Touring Society special. The Lyme Regis and Seaton Branches plus Ivatt Tanks.

Vectis Railtour to the Isle of Wight with Q Class 33026 to Portsmouth and the LCGB special on the Island.

Midhurst Belle Railtour of October with an S15, a ‘USA’ Tank, and a ‘Q’ Class for the run to various branches including Kemp Town and Midhurst Eastleigh and Southampton Special of December with a Britannia, a ‘Battle of Britain’ and ‘USA Tanks’.