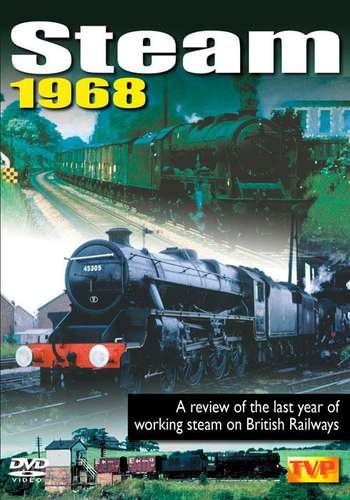 1968 saw the end of a century-and-a-half of our main-line steam railways. It started with just over 350 steam locomotives in service. Nearly all of the steam working was on freight traffic and some spectacular sights were still to be seen. As the year progressed, withdrawals continued and the remaining sheds were closed – or closed to steam at least.

Steam’s approaching demise was marked by a number of special trains, mostly organised by various enthusiast societies but one or two by BR as well. Right at the end, the 4th of August saw six railtours running in the Manchester and Preston divisional areas – and a week later, the very last train, the ‘Fifteen Guinea Special’ from Liverpool to Carlisle and back.

In this programme we celebrate some of the sights and events of that momentous year.

Steam in Action in 1968 including the Peak District and in and around Stockport, Bolton and the West Coast Main Line, Rose Grove the climb to Copy Pit.

The Final Railtours - LCGB Lancastrian, the North West Tour, the Last Day of Steam Railtour and the Fifteen Guinea Special of the 11th August 1968.

After the End - 4472 ‘Flying Scotsman’ on tour around the country. Carnforth Shed in the first months of preservation.