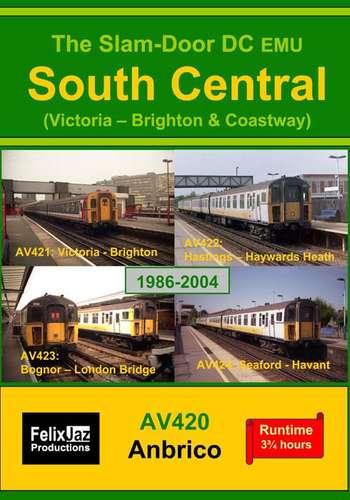 Section 1: Victoria – Clapham Junction
An EPB departs Victoria then we join our Brighton bound service. At Battersea Park many services pass. Next we race a train into Clapham Junction Station.

Section 2: Clapham Junction - East Croydon
A number of arrivals and departures are seen before journeying onwards. All stations are visited on the section of route to East Croydon.

Section 3: East Croydon - Horley
After a number of movements at East Croydon all stations are visited on the mainline to Horley. Reedham and Smitham are also visited, being near the mainline.

Section 5: Wivelsfield - Brighton
Now we visit Wivelsfield, Burgess Hill and Hassocks. While at Preston Park a number of empty stocks are seen. Then to Brighton and we see a number of movements.

Section 1: Hastings – Pevensey
After a couple of arrivals our South Central service departs Hastings. Next services are seen at St Leonards Warrior Square. We now visit all station stops between Collington and Pevensey and Westham.

Section 2: Eastbourne – Lewes
Movements are seen at Eastbourne including the departure of the DEMU service to Ashford. At Hampden Park many services are seen, some of which actually visit twice. We then go to all stations between Polgate and Lewes.

Section 3: Lewes – Haywards Heath
More services are seen at Lewes before we depart north. At Plumpton an arrival and departure are seen next to the race course. A service joins the mainline at Wivelsfield. Activity is then seen at Haywards Heath.

Section 4: The East Grinstead Branch
We start our journey at the end of the line. All stations are visited on the branch between Dormans and Sanderstead.  Riddlesdown sees services in the rain while Sanderstead witnesses the commute on a sunny evening.

Section 1: Bognor Regis - Ford
Arrivals and departures are seen at Bognor Regis. Next we see a number of services at Barnham arriving from each route. Now onto Ford station where a couple of eastbound stopping services are seen.

Section 2: Littlehampton - Horsham
We start our journey with a departure from Littlehampton. Arundel, Amberley and Pulborough are the next stations. At Billingshurst a couple of diversions pass as well as the booked services. Christ's Hospital and Horsham are next.

Section 3: Horsham– Three Bridges
On departure from Horsham we visit Littlehaven. Next stop is Faygate with its limited service. Ifield features quite heavily with both stopping and passing services in the rain. Crawley is seen before arrival at Three Bridges.

Section 6: Sutton – London Bridge
At Sutton a down service departs then at Tulse Hill and Queen's Road Peckham we see empty stock moves. Finally to London Bridge and we see activity there.


AV424 - The Slam-door DC EMU Seaford - Havant (The Coastway)
Filmed on location on the South Central.

Section 1: Seaford – Lewes
From Seaford we visit Bishopstone then travel on the service to Newhaven Harbour and Newhaven Town stations. Lewes is reached next.

Section 2: Lewes – Brighton
At Lewes we join the next westbound service. We call at Farmer, Moulsecoomb and London Road before finally arriving at Brighton.

Section 3: Hove – Shoreham-by-Sea
Hove is busy with units arriving and departing while a Pullman is being prepared. We then visit Aldrington, Portslade, Fishergate, Southwick and Shoreham-by-Sea.

Section 5: Worthing – Ford
At Worthing, in addition to the regular services, we see the Pullman service head west. West Worthing, Durrington-on-Sea, Goring-by-Sea, Angmering and Ford are visited next.

Section 6: Barnham - Havant
From Barnham we visit Chichester and see various services. Next Fishbourne, Southbourne, Emsworth and Warblington are seen before finishing our journey at Havant.