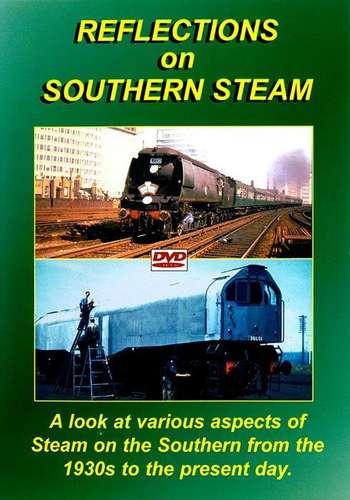 To many the Southern is, and always has been, an all electric railway.

However, in the days of steam the Southern had more variety of motive power than its neighbour the Great Western.

In this programme we reflect on the various aspects of Southern Steam, from the pre-war years through to the present day.

Archive film from the days of the Southern Railway, with steam at work on the Isle of Wight and on the former London and South Western system, plus a look at freight traffic.

Freight traffic in and around Feltham Yard in the 1960s, showing a wide range of classes at work.

Rare colour film showing steam at work in and around Waterloo in the years before nationalisation.

The Merchant Navy Class, with a look at their development in the 1940s plus 'Swanage' on the Mid Hants Railway.

The Bulleid's 'Leader' design using rare black and white film of the engine on test at Brighton.

The Hayling Island and Guildford to Horsham line.

Railways of the Isle of Wight.

30 years of the Bluebell Railway.

Railtours on the Southern.

PLUS a bonus programme 'Reflections on Main Line Southern Steam':

Featuring main line steam tours in 1992 to Ashford, Eastleigh and the South Coast.