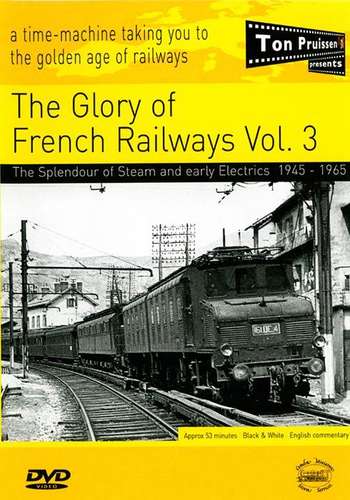 Mainly shot by Albert G. Nymeyer between 1947 and 1949 this film is an anti-clockwise journey around France, from Paris - Austerlitz, back to Paris - Gare de Lyon.

The first section is electrically hauled over the ex P.O. main line to Toulouse, and includes a visit to see our electric locomotive being prepared.

Steam is seen at the depot of Ussel, and elsewhere en-route.

The second section starts at Modane in the Alps, and shows both French dual over-head and third rail electrics, as well as Italian three-phase electric locomotives.

Finally we travel from Mulhouse to Paris with steam much in evidence, and from Lyon up the un-electrified Ligne Imperiale to Paris-Gare de Lyon, where one of Chapelon's legendary 240P locomotives is just leaving for the south, and the large ex PLM 4-8-4 tanks are seen on heavy pushpull suburban trains.

The historic recordings used in the soundtrack were made by H.G. Hesselink.