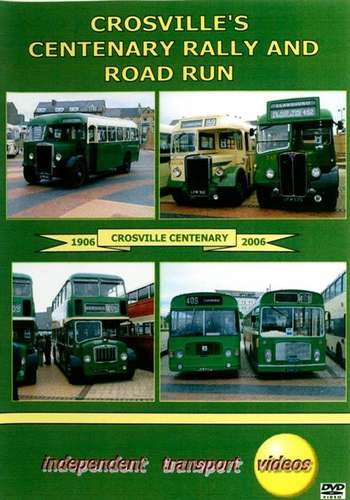 In 1906 the Crosville Motor Company was founded and five years after the Company's inception, motor bus operation began with the first route operating between Chester and Ellesmere Port. To mark the 100th Anniversary a commemorative Rally and Road Run was organised. Independent Transport Videos' cameras were on hand to capture the celebrations on April 30th 2006.

We open the programme at the Rhyl Events Arena and witness the arrival of almost 40 former Crosville vehicles ranging from a 1937 Leyland Tiger TS7 through various Bristol models up to Bristol VR's and early Leyland Olympians. Following a brief ceremony attended by the mayors of the local coastal towns and local MP Chris Ruane, a birthday cake was cut by Bob Hind of Arriva NW & W, our cameras then capture the first vehicles departing for the Road Run, a re-creation of the old 409 service from Rhyl to Llandudno Promenade. The Mayor of Rhyl distributed rally plaques to the entrants as they left the Arena with a helpful commentary by Clive Myers. Amongst these include KA226 (LFM 302) a 1950 Weymann bodied Leyland PS1/1 on which we ride to the Little Orme, savouring the sounds and atmosphere of travel along the North Wales coast 50 years ago.

Back at Rhyl we film the rest of the vehicles departing for Llandudno before boarding a 1976 ECW bodied Bristol LH6L SLL620 (MCA 620P) for an interesting ride along the coast in a vehicle 26 years younger than KA226! The vehicles are then seen passing over the Little Orme on their descent into Llandudno. Finally we view some of the vehicles operating on Llandundno Promenade and around the Great Orme.

This DVD programme is essential viewing for Crosville devotees and is a unique record of the event, which culminated in a dinner attended by over 100 people at Rhos-on-Sea that evening. So sit back and enjoy the day!