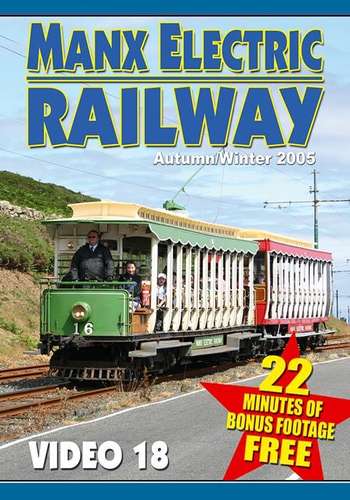 This specially extended edition takes a detailed look at a fascinating nine day period on the MER during the peak summer of 2005.

The video starts on Friday 22nd July with cars 33+61 on a morning special to Ramsey and then it's full coverage of what was a superb enthusiasts day. See cars 1+44 and 2+51 on the Ramsey service including superb footage of 1+44 and 9+61 from high above the MER at Ballaragh.

Cars 33+56 and 32+56 are featured in the afternoon and then the last cars out of Ramsey. The special evening service to Ramsey was worked by 21+41 and 32+47 and these two sets are featured in stunning night-time run pasts and running to depot at the close of service.

Day three highlights include a detailed look at cars 9+61 and 1+48 performing some odd moves at Groudle.

Day four has a rare bit of MER practice with a crossover move at Scarffe's to allow a tram to overtake! As the week moves on, there are more odd combinations and special workings including cars 2+59 to Ramsey, unusual moves at Laxey and something never done before... a journey on car 33 on the climb up to Ballaraugh with a special 'floor cam' recording the growl of 33s motors hard at work!