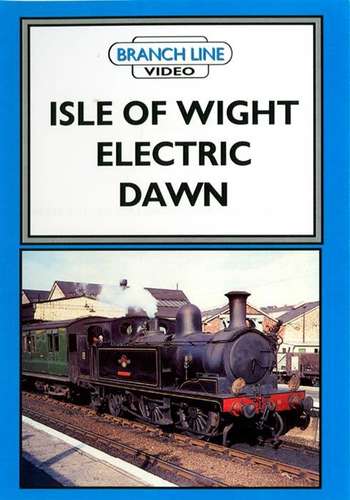 Isle of Wight Electric Dawn is the sequel to Isle of Wight Steam Sunset and charts the years 1966 and 1967 with the final demise of steam and the changeover to electric traction.

1966 also saw the closure of the Cowes line, as well as the section from Shanklin to Ventnor, and it is with these sad events that the DVD starts.

Included in this section are many poignant views of the closed stations taken some months after closure.

We then take a closer look at the remaining section of line between Ryde Pier Head and Shanklin.

The final summer of steam haulage could still boast the frantic activity that had taken place for so many years and the locomotives and rolling stock were well cared for and clean.

With the end of the summer timetable Ryde Pier closed to all traffic for a complete overhaul, ready for the introduction of electric services.

Scenes of steam cranes working on the pier, as well as steam-hauled work trains, makes for some fascinating viewing.

As 1966 drew to a close more and more signs of electrification began to appear, and many sequences show such rare scenes as No.24 Calbourne with the first electric coach at Sandown on gauge tests, as well as trains topping and tailing between St. Johns and the Esplanade.

The DVD documents the last day of steam services, before looking at the rush to finish the electrification work ready for the new services to commence in March 1967.

The final section of the DVD takes a fascinating look at the new electric service during its first summer operation.