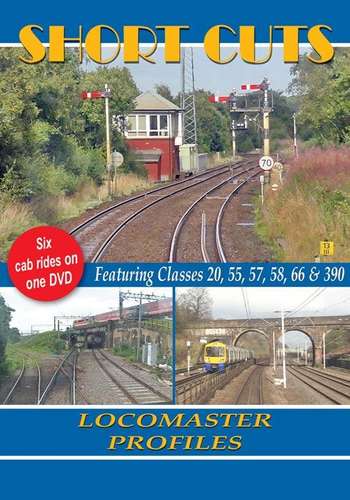 This collection of six cab ride sequences features journeys over main lines and branch lines in England, Scotland and Wales. All six were filmed on different types of traction - ranging from a 1961-built Class 20 and a 1984-built Class 58 to a modern high speed Virgin Pendolino. Equally, there’s as much contrast in the routes, from the London suburbs to rural Ayrshire and Derbyshire. The following six cab rides (all of which are previously un-released) were filmed between 2001 and 2017:

HOLYHEAD to BANGOR on 57309: the 25 miles of route in North Wales from Holy Island across Anglesey and onto the mainland are packed with interest. Semaphore signals, jointed track, request stops, Britain’s longest station name...and the magnificent Britannia Bridge.

ACTON WELLS to WEMBLEY YARD on 58025: a short cut from the North London Line to Wembley Yard. The maze of trackwork starts at Acton Wells Junction and the short journey  continues via Acton Canal Wharf, the single-track Up & Down Acton Branch, the Willesden Relief Line and the High Level Goods Line which leads into Wembley Yard.

KILMARNOCK to BARRHEAD on 55022: Deltic Royal Scots Grey tackles the seven-mile climb from Kilmarnock to the summit at Dunlop, hauling a refurbished EMU. This rural journey features the impressive collection of semaphore signals at Lugton and some fine scenery.

EUSTON to WATFORD JUNCTION on 390126: After leaving Euston on ‘Line X’ and climbing Camden bank, the WCML runs alongside the busy Watford DC Lines, past Willesden Junction and Wembley Yard. North of Bushey the Pendolino tilts at an impressive 110mph.

READING to BASINGSTOKE on 66082: this journey starts on the western approaches to the newly-remodelled Reading. After passing under the new Reading Viaduct onto the Reading West curve, this DB Cargo intermodal service heads onto the Berks & Hants Line before taking the route to Basingstoke via Mortimer and Bramley.