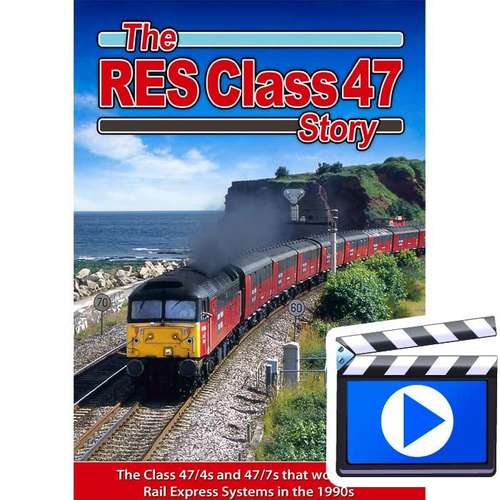 It was 1991 when the Rail Express Systems brand was first launched. Deep in the days of Sectorisation, numerous Class 08, 47, 86 and 90 locomotives were painted in the new red, grey and blue livery, to haul mail and postal trains countrywide.

Mostly based at Crewe and working in the PXLB pool, a varied selection of Class 47s were assembled and in 1993, the so called 'Super Sevens' sub-class was launched. This gathered together locos in the 47/4, 47/6 and 47/8 number ranges into a new sub-class of overhauled, long range fuel tank-fitted 47/7s - starting at 47721.

A real mish-mash of locos worked under the RES banner in the early 1990s. Celebrities such as 47500 'Great Western' in its BR green livery, became 47770 and some of the former Scottish, latterly NSE original 47/7s such as 47701 'Waverley' and 47707 'Holyrood' started a new life hauling mail vans. Many locos were named… using words starting Res…

As well as mail duties, the RES 47/7s were often used to haul charters and diverted ECML and WCML passenger trains, latterly working Birmingham to Holyhead and some even worked for Cross Country - painted in the Virgin livery.

This DVD tells the story of the RES 47/4s and 47/7s. From the regular countrywide mail duties in the 1990s, to charters, Scottish sleepers, SERCO test trains, diversions and their later years with Virgin and other TOCs. The story is brought right up to date, with the survivors in the year 2020, almost 30 years later!

Bonus footage: An overnight a Bristol Temple Meads on 2nd/3rd February 2000 - just before the 67s took over - featuring every mail train that passed, and 17 different 47/7s!