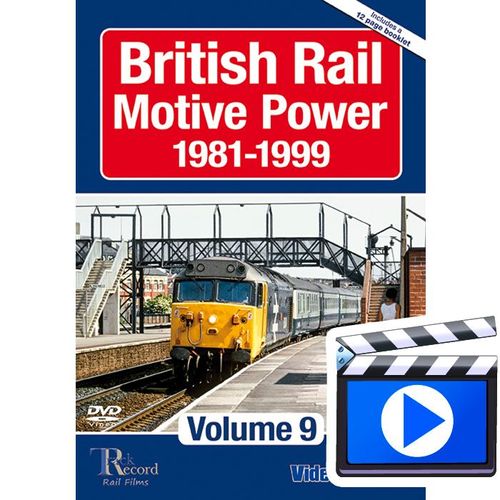 Highlights of Volume 9 include:

North Wales: A variety of motive power around Llandudno Junction including 47s on containers and passenger; 25s and 40s on freight, 40122 on a Railtour, EWS 37s from the late 1990s and various 101s.

Thames Valley: Action from Oxford and Reading with 47s and 50s on passenger trains, various HSTs, BR green 37350 and the mega-rare sight of a HST power car with a Mk I BG coach!

Birmingham New Street: Lots of BR blue action with 85s, 86s and 87s on Cross Country and Euston services, various DMUs including a brown and cream set with a Class 128 DPU. 50015 works a service to Paddington and young spotters attempt to take a rubbing of 'City of Milton Keynes' nameplate!

Chester: Footage from the early 1980s with Class 25s on freight.

Westward Whistler: This railtour ran on 16th October 1982, featuring 40057+40084 from York to Plymouth. Footage comes from BNS, a photo stop at Cheltenham, Plymouth and then various moves on Laira depot.