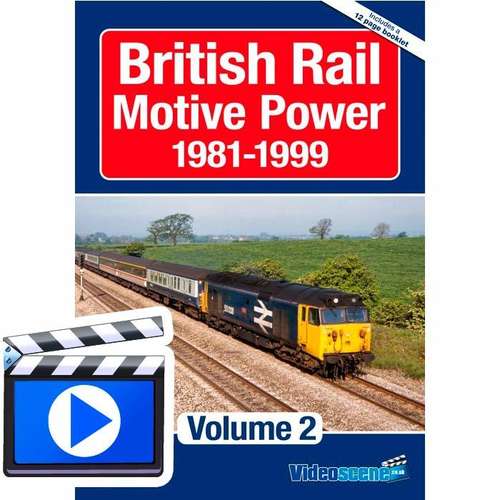 Following the success of the first DVD, this is the second title in the British Rail Motive Power series. Sourced from 121 hours of unused and unseen railway film, shot between 1981 and 1999 and all recorded with the original audio on tripod-mounted cameras, this is not just any old film!

With detailed attention to sound and picture quality, carefully edited and presented in a simple, no-nonsense format, with on-screen dates and locations accompanied by an improved and detailed 12 page booklet, British Rail Motive Power 1981-1999 Volume 2 is another blast from the past for anybody who was there 'in the day' and wants to relive the golden years of BR blue and beyond.

Highlights of Volume 2 include:

Midlands: From the Lickey incline and Blackwell, 50038 comes over the top with 45005 and 45126 heading down. At Bescot, the staggering sight of TEN Class 20s coupled together, running to the yard! Class 25s are seen and at Wolverhampton, 85013 arrives from New Street whilst an Express Parcels Class 115 DMU comes in from Shrewsbury! 37675+37429 arrive from Holyhead!