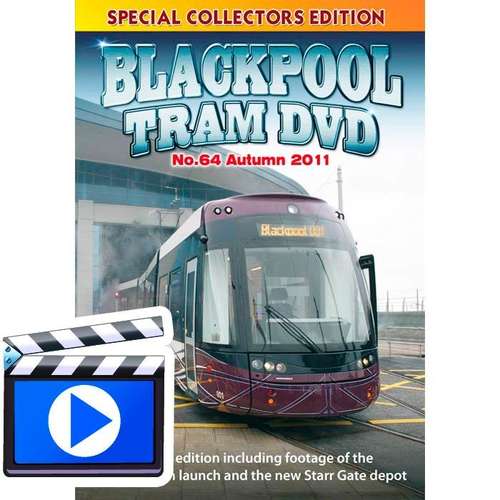 This special edition of the Blackpool Tram DVD features the launch of the first Flexity2 tram from 8th September 2011. Emerging from the new depot at Starr Gate in a blaze of glory, tram 001 is seen by the public for the very first time. With specially invited guests it then ran two journeys to Pleasure Beach and back. Included on this DVD is the launch itself, a look around the new depot at Starr Gate and a detailed look at tram 001, inside and out including a ride filmed from behind the driver.

The summer of 2011 was an interesting one with the widened Balloon cars making their debut, various new advert liveries and 715 repainted into the green and cream livery. Boat 600 is used in a charity tram pull, 733+734 make a rare daylight outing and there s a look at the new tram and road layout around the Metropole. The summer concludes with events on Illumination switch on night, 2nd September, as the busy autumn period gets underway.

Away from Blackpool itself, a former Blackpool icon, Marton VAMBAC 11 made a special appearance at Beamish Museum for their  Power from the Past  event. On loan from the East Anglia Transport Museum, see this magnificent tramcar in a special night shoot and then in normal service on the museum circuit. Other Beamish cars are included alongside ex-Blackpool cars Marton 31 and Balloon 703.