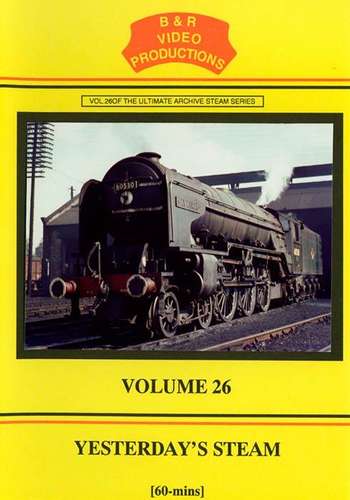 This film starts in Scotland with visits to St. Margarets and Dundee sheds featuring V2, B1, J37 and A2 60532 "Blue Peter" among others.

Returning to Glasgow Central we follow Standard Class 3MT 77005 on a brake van tour around Holytown and Motherwell in 1965.

Southwards to Stoke-on-Trent for an exhibition of locomotives there in 1960, followed by film of Kidsgrove and the WCML between Stafford and Whitmore featuring Crab, Patriot and Super D locos.

Then to the Peak District for a look at the Buxton to Millers Dale auto train, lineside and on a train journey with LMS tanks 58083 and 41905.

Over the Irish Sea we find ex-LMS NCC division 2-6-4Ts at work on the spoil trains from Belfast in 1968, with a visit to York Road depot included.

Now south through Dundalk to Athlone and beyond with a railtour with runpasts in the Emerald Isle. Jeep No. 4 and CIE 0-6-0 No. 186 star in this 2 day railtour.

Back in England, we cover the Midland Ltd tour of 1962 from Marylebone to Derby via Nottingham behind ex-LNER B16 61438 and then utilising a Johnson 3F and the last "Pom-Pom" in service, No. 64354.

A visit to Derby shed is included with views of Patriot 45543 "Home Guard" which hauled this tour on its last leg to St. Pancras.

The "Banburian" tour from Luton Bute Street to Banbury Merton Street via Dunstable with Super D 48930 in 1962 precludes scenes at Banbury in 1966.

Then travelling onto Woodford Halse to join GWR engines 2246 and 6388 on a tour via Worcester, Birmingham and on to Cheltenham viewing 45552 "Silver Jubilee" and Castle 7005 "Sir Edward Elgar".

The film ends with a return to Scotland via Carlisle where we see A4, Britannia and Jubilee locos and scenes of the Jones Goods on a tour around Glasgow and GNSR No. 49 with Caledonian Single No. 123 at Glasgow Central in 1965.

Much of this film was shot by Bob Todd and Tony Powell who contributed much to Volumes 23 and 25, all excellent material.