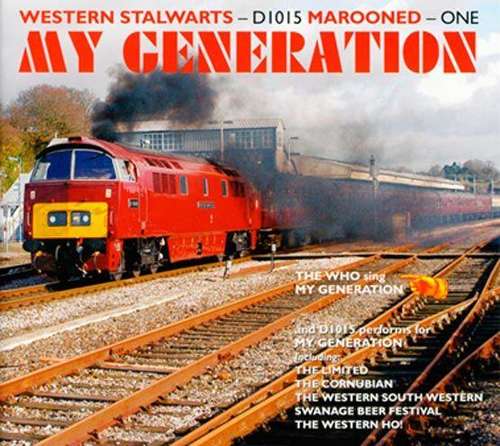 “We could have picked any period to open our doors, but leaving our signature livery behind in favour of a fresh coat of maroon small-yellow was a milestone for us, so that is where we begin.”

Together since their teens and to some extent seen as reclusive, thirty years on the collective that is the Diesel Traction Group at last allows diesel-hydraulic fans unprecedented access to their world, engineers Chris Hatton, Paul Koch, Andy Venn, Steve Vial, Steve Wainwright, Trevor Walton, and Richard Williams being at the heart of the Maybach Music. Captured during behind the scenes moments at Old Oak Common, and on the road with D1015 Western Champion to Penzance, Minehead, and Swanage, the Golden Ochre era is left behind and a new front man takes the stage as the Group enters its Maroon phase. Much anticipated, ‘Champion’ has not been seen in this guise since May 1968, so the resumption of touring recalls the days of 1965 when Maroon was the fresh colour from West London to the West of England. That year, The Who, released ‘My Generation’, so, inspired by the music of that era, our Old Oak Common based ‘Thousand’ relives those glorious days.D1015’s pair of MD655 Maybach engines is ready to unleash 2,700hp, so brace yourself for a 90mph ride!

DO YOU WISH IT COULD BE 1965 AGAIN?
More than just a DVD. In addition to taking you behind the scenes, this DVD also includes a 16-page booklet that is packed with information about D1015’s workings from its repaint into Maroon through to the loco’s final departure from the Factory at Old Oak Common. The log includes dates for all workings – light engine, ECS, freight operations and a handful of runs on preserved lines – as well as miles & chains, engine hours (main line and on preserved lines), and other notes.

DTG – Providing a Maybach Music soundtrack for the 21st Century. Although there is a big story to tell, Western Champion is more than capable of doing the talking, so once the railtours start, a switch to the second audio track offers more of the Maybach Music and just the odd introduction as an alternative way to enjoy the programme.