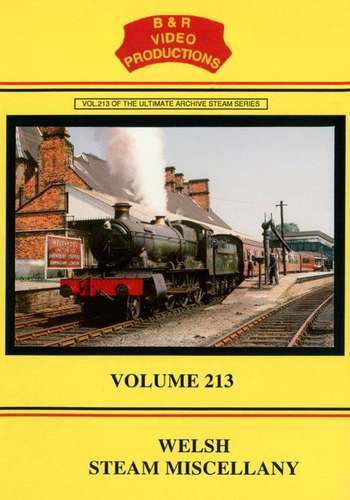 Another instalment of our popular “Miscellany” series this time focusing on steam in Wales. It features mostly previously unseen footage largely compiled in the order the film runs off the original cine reels.

We begin at Llangollen and travel on to other locations along this route including Berwyn (with Dukedog 4-4-0s and even a Bulldog 4-4-0), Glyndyfrdwy, Llandderfel, Bala Junction, Bala and the loop at Garnneddwen. The line from Pontypool Road to Neath cut across the heads of the valleys of South Wales and was inevitably a steeply graded route with many tunnels and viaducts. The most famous of all these viaducts was the Crumlin Viaduct, the highest in the country. There is plenty of film footage here for us to admire this massive structure. Hengoed Viaduct is also seen along with both the High Level and Low Level stations. We then visit Nelson & Llancaiach, the branch to Cwmbargoed and Dowlais Cae Harris and Quakers Yard High Level before visiting Aberdare High Level with its staggered platforms.

Into North Wales, we visit Bangor and then on Anglesey, Llanfair PG, Gaerwen and Amlwch. Moving south again, we visit the Central Wales line for the decent from Sugar Loaf Summit and Llandovery. The line from Shrewsbury to Chester forms the eastern boundary of this volume and we include footage at Chirk, Cefn Viaduct, Ruabon, Croes Newydd and Gresford Bank and in the snow, the Brymbo Branch. On the Cambrian main line we visit Welshpool, Talerddig Bank, Macynlleth, Dovey Junction, Borth and Aberystwyth; this coastal route includes visits to Gogarth Halt, Towyn, Fairbourne and Barmouth.

Back to South Wales and we see steam action at Cardiff, Newport (including a visit to Cashmore’s scrapyard), Severn Tunnel Junction and Torpantau. We then journey down the Rhondda Fach from Maerdy and see freight trains labouring up the Llanvihangel Bank complete with banking assistance. All in all a veritable feast of Welsh Steam!

The archive film is in both colour and Black & White. An authentic sound track has been added along with a commentary to complement this nostalgic look at the last years of Welsh steam.