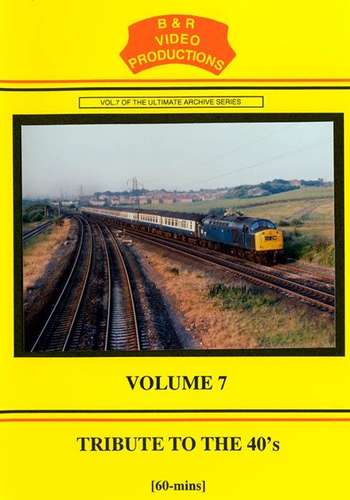 The 40s have gone. From their inception, their distinctive shape and sound made the English Electric Type 4s more acceptable to the average steam enthusiast than did most other classes of diesel.

Based on the WCML and ECML as well as GE metals, with occasional forays into Southern and Western territories, the EE Type 4s headed many of the crack expresses during the 1960s.

They took over from A3s, A4s, Britannias, Princesses and Coronations.

Later they were themselves have been superceded by the next generation of power in the shape of 47s, HSTs, 56s, 50s and electric power.

This DVD covers the wide-ranging activities of the class across the country on passenger and freight duties.

A feature on 40143 as she heads for Northwich off the main line at Hartford with her train of tanks for the Winnington Branch. Having deposited these, she immediately runs round and returns to the main line.

On the Shrewsbury to Hereford line, several trains a week of aggregates are collected in hopper wagons. This was a Class 40 duty for some time and we see a number of locos active on this operation.

A short section shows 40s working with other locos, with one or two dated scenes in evidence.

Special workings feature 40106 in green and D200 on her first run since being repainted in original colours.