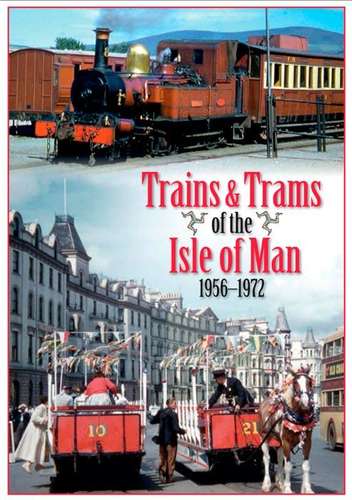 The Isle of Man has a rich transport heritage – which lives on to this day – in which Victorian steam locomotives hauled passenger trains and Victorian tramcars carried passengers along the roadways. These have barely changed in appearance since they first ran, but their story has not all been plain sailing.

In the middle of the 20th century railways and trams were seen as old and obsolete and it seemed likely that both passengers and goods would turn to road transport, causing the trains and trams to disappear. Happily that was not to be! The railways – the trams running on the Manx Electric Railway and the trains on the Isle of Man Railway – reinvented themselves and became a tourist attraction in their own right after two difficult decades. Those troublesome years are the subject of this programme, our story beginning in 1956 and continuing until the dawn of the 1970s.

In full colour archive footage we see the steam train services at their peak, serving Port Erin in the south as well as Peel and Ramsey from Douglas along the western and northern coast and also the trams running along the eastern coast to Ramsey from Douglas and, from a junction at Laxey, up to the highest point on the island – Snaefell.

Our narrative records the history of all of these lines in those turbulent times and illustrates the last days of their independence and the period when the Marquess of Ailsa sought to reinvigorate the steam railway.

With original archive views of red and green steam locomotives and trams of many colours – and, of course, the famous horse trams of Douglas Promenade which carried on regardless – these are the Trains and Trams of the Isle of Man.