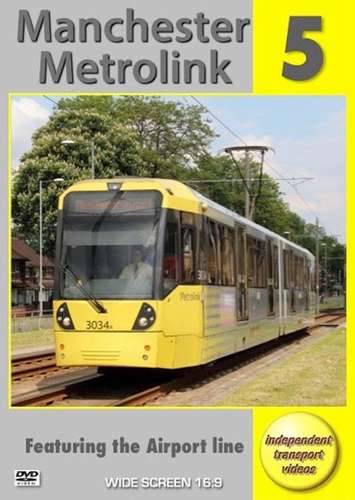 This is the fifth DVD programme featuring the Manchester Metrolink light rail system from independent transport videos. Manchester Metrolink opened in 1992 with a 19-mile route that ran from Bury to Altrincham via Manchester city centre using former railway lines inherited from British Rail. In view of this all stops were constructed to mainline railway platform height. Initially there was some 3km of street running from Victoria station to Piccadilly station, but this has now been extended as the system has developed. Major extensions to the network began in 2009 and by 2014 the trams also served Rochdale, Oldham, Ashton-under-Lyne, East Didsbury and Eccles. In late 2014 the trams reached Manchester Airport and in early 2015 the area of Victoria station used by the trams was completely remodelled. Work also began on the second city crossing (2CC) and this opened during March 2017. The fleet now consists of 120 Bombardier M5000 trams, which are 2-section bi-directional cars manufactured by Bombardier in their factories in Bautzen, Germany or Vienna, Austria. Although the trams may all look similar, trams 3001 – 3060 can be used throughout the system as they are fitted with an automatic tram stop system, but trams 3061 – 3120 do not have this system so can only be used on the Ashton-under-Lyne, East Didsbury, Manchester Airport and Rochdale lines. All of the trams operate in a yellow and silver livery.

The line featured in this programme is the line to Manchester Airport. Our filming begins at the Piccadilly tram stop underneath the Piccadilly main line railway station in Manchester city centre before moving along to the busy Piccadilly Gardens where most of the trams pass through operating to all parts of this growing tram network. We continue filming in the city centre before venturing out on the Airport line to give you a flavour of tramway operations in May 2019. City centre locations featured are Mosley Street, Princess Street, Lower Mosley Street and St Peter’s Square. It is at St Peter’s Square that we board tram 3053, a Bombardier M5000, for the relatively short journey to the Trafford Bar stop. Here we see trams passing through on the Altrincham, East Didsbury and the Airport lines toward the city as well as trams operating from the city centre. The next location is Barlow Moor Road, Chorlton-cum-Hardy which is the first stop on the Airport line. From here we call at Sale Water Park and then travel on tram 3030 to Wythenshawe Park.

More filming is completed at Benchill, Hollyhedge Road and Wythenshawe town centre. Further locations featured are Simonsway and Robinswood Road in Wythenshawe. We then board tram 3053 and arrive at Shadowmoss where we get a good view of the aircraft landing at Manchester Airport! We conclude our journey to Manchester Airport on tram 3095. To finish our programme we return to the city centre, but this time in December 2019 to film the trams in action at Corporation Street, Balloon Street, Shudehill, Piccadilly Gardens, Mosley Street and St Peter’s Square.