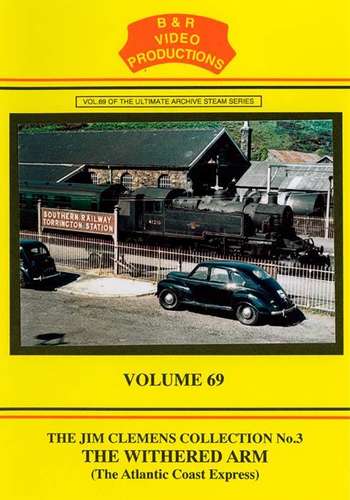 This is a classic journey on the Atlantic Coast Express to the far flung reaches of the Southern Railway known as the Withered Arm, the part of the route west of Exeter.

Join this celebrated train at Waterloo and travel via Basingstoke, Salisbury and Sidmouth Junction to Exeter Central, seeing the line from the train and lineside in steam days, no single lines then.

On to the Withered Arm itself to Barnstaple Junction and Ilfracombe, virtually every station is seen.

Return to Barnstaple and travel south via Instow and Bideford to Torrington with 02 and Ivatt tank engines.

Forward to busy Halwill Junction before an in depth visit to the Bude branch and its harbour line. T9's still visited here in 1961.

Bodmin is visited, both General and North stations. Return via Bere Alston, Gunnislake and Okehampton to Exeter Central.

There is a visit to Penzance by a Bulleid Pacific, steam once again at Barnstaple Victoria Road.

This has to be the definitive video of the Southern in Devon and Cornwall superbly filmed in those sunny days of the early 1960s all in colour.