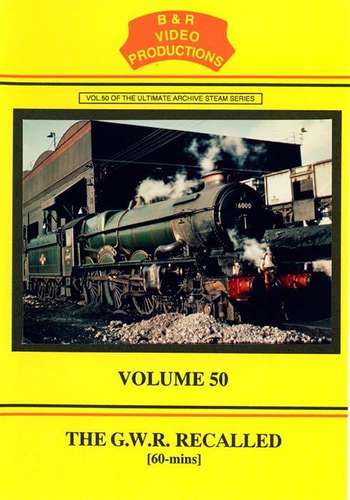 A look at the Western Region of British Railways from 1958 to 1965 covering all the major classes of ex- GWR motive power.

There is Paddington in all its steam glory with Kings, Castles, Halls and pannier tanks.

It was the starting point for a unique railtour in 1963 to Swindon Works behind 72006 "Clan Mackenzie". We join the tour and see Swindon Works while it was still overhauling steam followed by a visit to the shed.

A return to Paddington for lineside action through Westbourne Park in 1962, more Kings, Castles, County, Hall and a view of 4704 the ultimate 2-8-0 of the GWR.

Westward via Southall in 1963 to Maidenhead and a nostalgic look at the Marlow branch and its "donkey".

At Reading, also in 1963, more Castle action and a couple of SR engines pass through en-route to Moreton yards.

Didcot provides us with another County class and the last GWR Castle "Great Western".

Sapperton for the Chalford auto trains lead on to the Birmingham route at Hatton and yet another rare event, Bulleid Pacifics on football specials at Handsworth & Smethwick.

Farewell to the Kings with 6018 to Swindon, then Oxford and the last steam train to Fishguard with 6859.

Returning to London there is a look at the Brentford and Windsor branches before 7029's last Farewell tour.