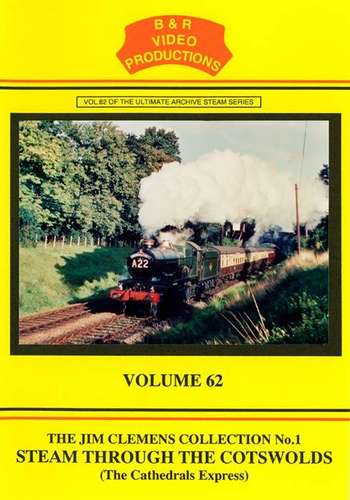 This is the first volume from the Jim Clemens Collection, covering the route of the famous Cathedrals Express from Paddington to Worcester and Hereford.

Branch lines along the route are also visited such as Newbury to Didcot, Oxford to Fairford, Moreton to Shipston, Kingham to Notgrove and Chipping Norton.

At Worcester we take a look at the "Vinegar" branch and the Kidderminster portion of the Cathedrals Express.

On to Hereford with that portion viewing all stations and visiting the Bromyard branch, before Malvern and Ledbury and an arrival at Hereford.

Castles abound of course with a little footplate running thrown in.

A King appears at Princes Risborough and a GWR Railcar at Ledbury.

This is pure detail on a route not seen on video before in its entirety.