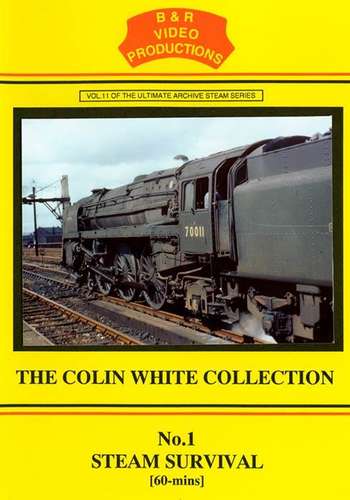 This film was the first in a new series from Colin White's immense collection of cine film.

We start on Shap Incline in 1967, its last summer of steam traction with Stanier's Black 5s and 8Fs, Britannias and other Standards, and the Divisional Manager's saloon in charge of an Ivatt Class 2MT.

Tebay shed is visited and 70033 picks up water from Dillicar Troughs.

The Southern region was the last to have pacific power regularly on its expresses from London to Bournemouth and we are treated to scenes on this line of Bulleid and Standard classes in 1966.

The preparation of locos at Nine Elms shed is seen in detail before the high speed running west of the capital.

Didcot in 1969 before the Great Western Society really got going shows 1466 amongst early diesels and scurrying up the coal stage, rare early preservation archive film.

Industrial railways were fascinating. Corby shows hard-working tank engines from the quarries and the steelworks.

APCM Swanscombe in Kent had 0-4-0 saddle tanks trying desperately hard to stay on the tracks, bouncing around through the mud.

On better track was RSH 7597 at the CEGB Rye House power station.

This then, is a whole hour of variety, from diminutive tank engines to roaring pacifics.