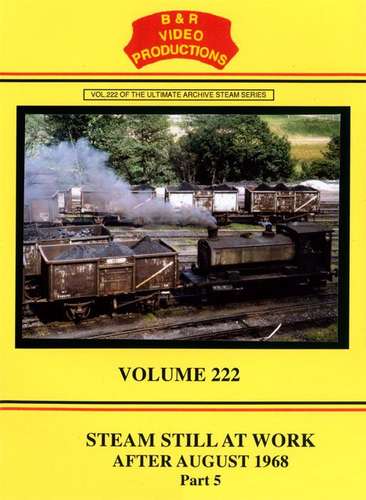 The fifth part in our “Steam Still at Work” series of films which mostly features the steam scene both at home and overseas after the end of main line steam on British Railways in 1968. The series continues until the “Return to Steam” tours on BR in October 1971.

We begin in Kent during 1969 where Mogul U-class 2-6-0 No.31618 (the 2nd locomotive rescued from Barry scrapyard) is seen near Maidstone, followed by the first of two journeys to the Ashford Steam Centre where there is a strong South Eastern & Chatham representation. We next visit Bridgnorth during 1965 at the very beginning of the Severn Valley Railway followed by scenes of the early days of workings to Hampton Loade featuring Nos.46443, 3205, 8233, 43106, and GWR railcar 22.

Many ex-GWR pannier tanks found a new commercial working life after BR and visits are made to see them on London Transport (No.L92) and on the NCB at Coventry (No.1502), Merthyr Vale (No.9600), and Mountain Ash (No.7754) collieries. In South Wales further NCB sites seen are Hafodyrynys, Celynen South, Brynlliw, and Maesteg.

Although not steam, another system of interest to enthusiasts visited at the end of 1969 was the “Woodhead” electrified system from Manchester to Sheffield Victoria.

Further locations include Quainton Road, Bulmer’s at Hereford, Carnforth, Tyseley, and the Bluebell Railway on the occasion of their tenth anniversary. In North Wales visits are also made to the Welshpool & Llanfair (including the Legendary “Monarch” 0-4-4-0), Talyllyn and Vale of Rheidol railways.

Steam could also still be found across the Channel. We visit the last entirely steam-worked terminus in Paris at Gare-de-la-Bastille using 2-8-2 tanks during December 1969 plus also near Boissy and Vincennes. A trip was also organised to North Germany by the LCGB in April 1970 and includes Lingen (with a visit to the locomotive works) and Emden. Motive power features double-headed 011 Pacifics, Nos. 012, 023, and even an 082 0-10-0 tank.

The archive film is entirely in colour. An authentic soundtrack has been added along with commentary to complement our nostalgic look at this period from 1969 to 1970.