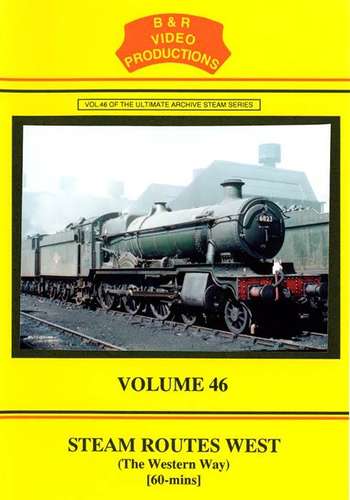 The Western Way takes a journey from Paddington to Saltash but not necessarily by the most direct route.

It is primarily to visit the less well covered areas by film cameramen dealing with secondary lines and branches.

Gloucester is reached via Reading, after which there is a look at the Chalfont auto service along the Golden Valley.

On via Bristol Temple Meads to find Tiverton Junction. Here, in 1963, a railtour headed by 60022 "Mallard" allowed participants a trip from Exeter via Cadleigh behind two 45xx prairie tanks to the Junction, before visiting the Hemyock branch. This was worked by 14xx auto tanks and this theme continues for a visit to the Teign Valley line from Newton Abbot to Exeter via Heathfield, filmed in 1958.

Then a visit to the Moretonhampstead branch also in 1958, Titfield Thunderbolt stuff this, racing the local bus!

A branch to survive into preservation was the Ashburton line from Totnes. This is seen in depth, also in 2958, and all these lines in colour. Before the Dart Valley or South Devon Railways came into existence, stock was stored and steamed at Totnes Quay including 6998, 1363 and 1466.

Banking on Rattery is seen taking us further west into Plymouth and a shed visit to Laira.

An auto train is used to journey across the Saltash Bridge and visit the station.

Steam in and out of Cornwall in the hands of Castle, County and Grange classes.

Finally back to Paddington with "Burton Agnes Hall", "City of Truro" and the last County No. 1011, and Castle and diesel hydraulics at Iver.

No. 7025 "Sudeley Castle" arrives under Brunel's roof just how it was in the days of steam.

Twenty-five classes of steam, most of them ex-GWR, and the true GWR branch line atmosphere are well portrayed. There is some very rare footage here!