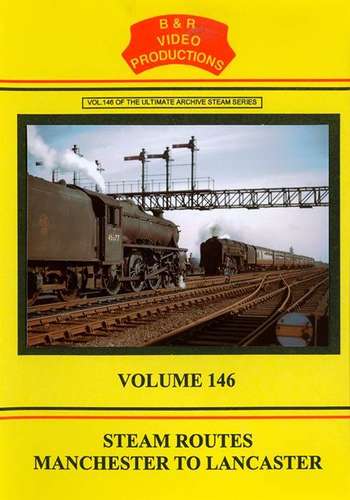 This is the continuation of the Steam Route series and features the 1960s days of steam traction between Manchester and Lancaster via Warrington, Wigan and Preston.

In Manchester there are a few more views of steam at Manchester Victoria that leads, as does Platform 11, to Manchester Exchange.

West of here was Patricroft shed, which is visited in its last year of steam operation.

The freight yards here were still busy with steam hauled trains and the West Coast trains are seen from them with trains ascending and descending from Acton Grange.

Next there is much activity through Warrington Bank Quay High Level platforms before we travel northwards to Winwick and then Wigan where both North Western and Wallgate stations are seen with steam.

Onwards to Preston via Farrington Junction with views of Skew Bridge and steam activity in Preston station on both the main line and the erstwhile East Lancashire line.

There are good views of steam at Preston No. 5 signal box before we finally head north for Barton and Broughton, Brock water troughs and Garstang, before arriving in Lancaster.

Motive power seen is both ex-LMS Stanier and BR Standard locomotives, including a few Royal Scots and Jubilees.

The archive film used is in colour with an authentic sound track and an extensively researched commentary.