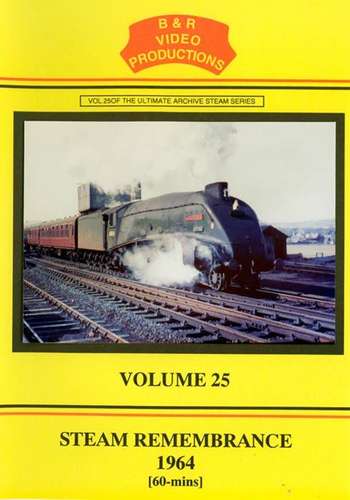 If you want steam in its last glorious year then this film will delight. No, not 1967 but 1964 when so many loved classes went from the scene.

The film taken so well by Bob Todd and seen by many at railway meetings around the country will interest those who mourn the loss of steam traction.

Bob used an all-lines railrover to visit such locations as Paddington for Panniers, 61xx and Castle classes, even a condensing pannier tank.

Exeter for four engines on the Meldon Quarry stone train, Wadebridge for 1366 class and the North Cornwall line to Okehampton.

Yeovil for 6430 and push-pull working to Sherborne and a railtour to Hereford with 5054, preclude a visit to the Cromford and High Peak line with ex-LMs 47006.

Six different A4s are seen at Aberdeen, Perth and Stirling along with three Princess Coronation Pacifics in their last working week, green and maroon.

Bob's failed DMU is rescued by a B1.

The film ends with a journey to Carlisle with now preserved 70013 "Oliver Cromwell".

Wth nearly 90 different engines of 30 classes this is a superb compilation of 1964.