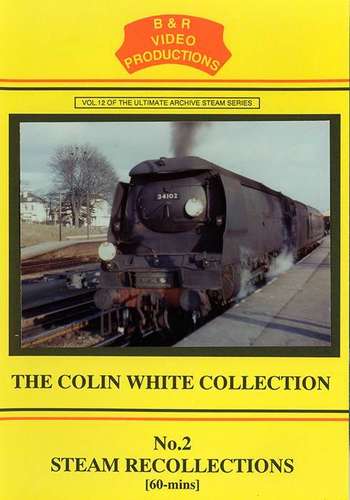 The second of the productions from Colin White's collection has six sections covering his favourite line and engines. We start with an extended look at the Weymouth area and its notorious Bincombe bank at 1-in-50, steeper than Shap.

Colin lived here for many years and indeed his father was a fireman here in GWR days. Colin returned in 1966 and filmed in detail the workings over the whole five miles to Upwey. Here you can relive preparation on the shed of 34108 "Wincanton" with often hilarious results!

Bullieds, Standards and Ivatt classes predominate with the occasional Black 5. Banking sequences and views of this much changed location are historically interesting.

Next, Britannias are featured in the north west with Shap incline well covered. Nine of the class are seen working from Carlisle Kingoor depot.

The last LNER engines in traffic in 1966 were B1's, A4's, J37 and J38 classes mainly in Scotland. We see then around Dunfermline (even one B1 at Banbury).

Staying with the LNER, 4472 is undoubtedly the most famous engine of them all and Colin was a member of its support crew in 1968 and 1969. His unique position gives us an insight into the engine with preparation at Finsbury Park and some of its early runs on the East Coast Main Line.

The departure from Kings Cross on the 1st May 1968, the 40th anniversary non-stop is seen from high above Kings Cross.

Ex-GWR Pannier tanks were sold to London Transport to work out of Neasden. We follow their escapades on the Croxley Green waste tip trains and an in-depth look at Neasden Shed.

The final section portrays the Victorian elegance of the Stirling Single GNR No. 1 during her brief sojourn on the Main Line Steam Trust at Loughborough in 1981.