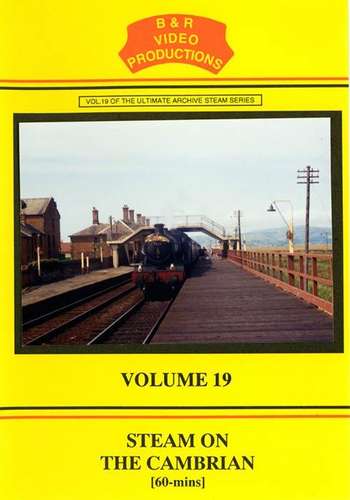 The most well-known film maker around Shrewsbury was Bill Cross who really loved the Cambrian and Borders country.

Thankfully he had the foursight to record the lines of this area when steam still reigned supreme, using a 16mm camera.

The Cambrian system is probably only second to the Somerset and Dorset in popularity with enthusiasts.

Steam returned to Cambrian metals in 1987 and 1991 so here is the chance to see it when steam arrived on every train.

We travel from Whitchurch in the east to Aberystwyth in the west calling at Barmouth, Dovey Junction and Borth to see local trains and the famous Cambrian Coast Express.

Oswestry, where the Cambrian had their headquarters, was full of steam and we visit Gobowen, Tinkers Green and the Ellesmere to Whitchurch line via Fenns Bank.

The locos of the early 1960s were Standard and Ivatt designed but we also see six different Manors and the Talylynn special hauled by 7827 and 4555 in GWR livery.

The final section of the film covers services that are no longer with us including the Caernarvon branch and a journey by DMU from Wolverhampton to Birmingham Snow Hill.

Bill rarely filmed far from home but he did visit the Isle of Wight in 1966 and 1967. We include a short section on this popular venue.

A highlight of the film is what is believed to be the only known piece of film of the Corris Railway in the 1920s!

The Vale of Rheidol railway ends this beautiful programme filmed in the early 1960s when the terminus was near the river.

Bill, himself an authority on all things Cambrian, narrates this video and of course the equally fascinating Volume 22.