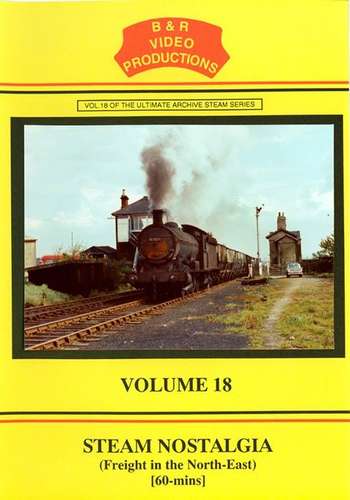 A film devoted almost entirely to freight workings in the North East of England as it was in the 1960s.

The Q6 and J27 locomotives were the last pre-grouping engines working on BR and are seen really hard at work alongside Class K1 and WD 2-8-0s.

Coverage of the famous Silksworth branch is seen from the lineside, footplate and guards van.

Ride with us to Sunderland on a coal train and listen to the power of J27s in full cry for the sounds were recorded at the same time as filming by George Woods.

The area was rich in industry and this is not omitted with coverage of some unique locomotives at work at Seaham harbour with the Lewin of 1863 vintage parading in front of our cameras.

There is another visit to Doxford ship yards for crane tanks and some of the collieries that abounded in this area.

There are the large tanks at Philadelpia with their chime whistles, an ex-LNER J94 68078 at work at Widdrington pit and examples of other locomotives at the various colliery systems of Northumberland like Ashington, Backworth and Whittle.

Finally tribute is paid in the North-East Locomotive Preservation Group from their early days when they restored Q6 63395 to BR livery, an engine seen at work earlier in the video.

Their locomotives were to be seen immaculately turned out at Shildon in 1975 and lastly the Q6, J27, K1 and Black 5 44767 are seen hard at work on the North Yorkshire Moors Railway in 1976.